I've been dabbling with the idea of FFGs Dark Heresy RPG. If/when I start, I want a flyer to be used for theatrical effect. Unfortunately, Forge World no longer makes the Aquila Lander. This would have gone great with the crashed lander terrain. So I settled for the next best thing, the Arvus Lighter. This is a simple little flyer with no weapons of any kind. It's basically a flying truck. I painted mine up with a bit of dash with arrows on the wings. I also painted up the pilots helmet to resemble my own that I painted this past December. 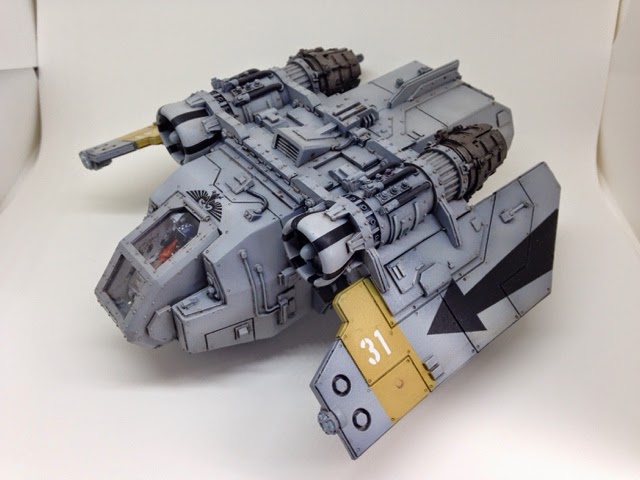 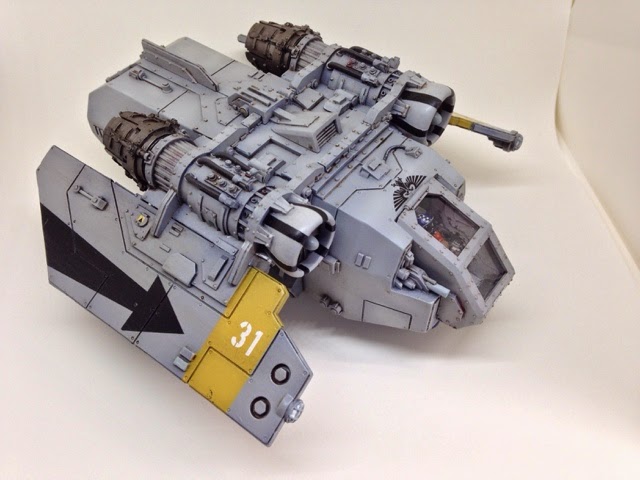 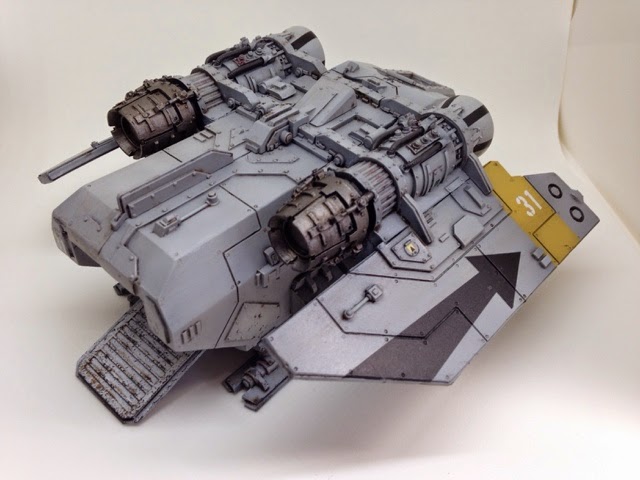 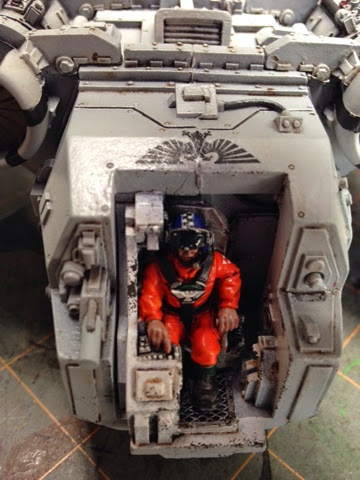 I used Astronomicon/Administratum Grey as the base. A drop of white for the panels all over a black primer. Trying to leave the panel lines dark. Charadon Granite/Dryad Bark was sponged on for wear spots. Oil washes was used extensively inside and out. It is so much easier with oil washes to get much if the weathering going. Give it a try at least once.
On the vehicle, I pretty much had everything pinned, the wings to the engines, engines to the fuselage, fuselage halves together, and rear landing legs to the body. I used large paper clips for the pins, no little ones this time. Overall it went together fairly nice. There was some warped items, but utilizing hot water, I was able to get a desired shape.
Posted by color blind painter at 12:01 AM No comments:

I've had a pair of Vindicators sitting in boxes for a few years. Now that I'm trying to stick to a unit a week, I decided to paint them both up simultaneously. Technically it'll be two units, but I know it's cheating. The two new ones are the plastic kits. I have an original Forgeworld from about ten years ago. So these will make for a Linebreaker Squadron in Apocalypse, if it's still an option. Anyway, here they are. 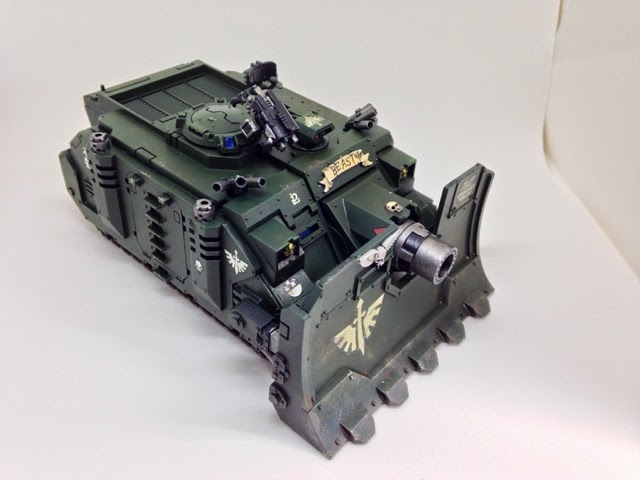 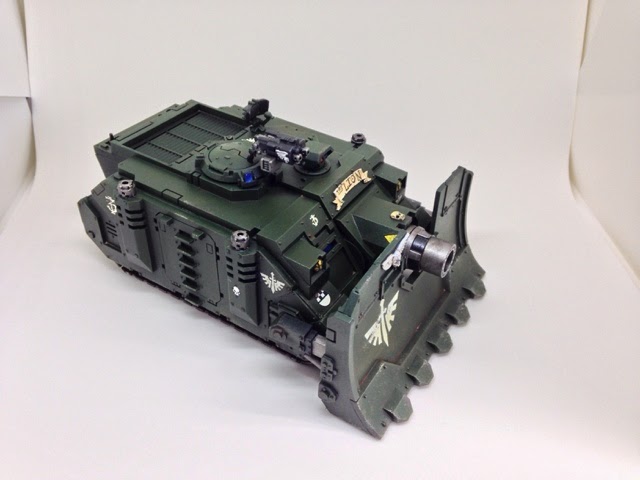 And for comparison, here is the Forgeworld version. There really aren't many changes. It's mostly a straight port over from resin to plastic. 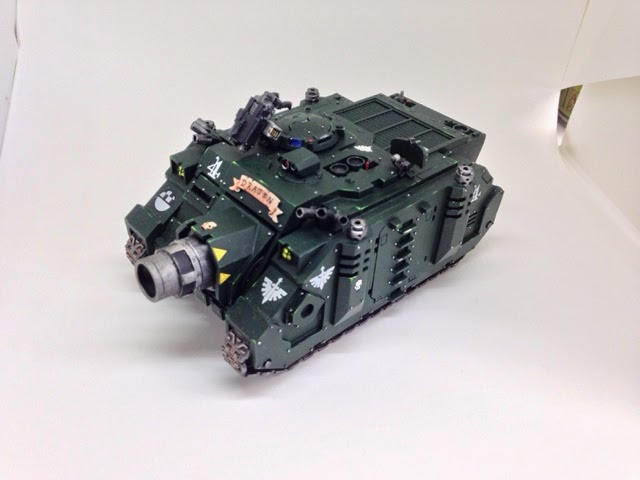 The only differences are the screen in the back is now deeper, the gun now pivots up/down and the extra armor where the lights sit. Although, my colors are different. Since GW stopped making Dark Angels Green I've moved on to Army Painter's Angel Green that I like quite a bit. Comparison shot 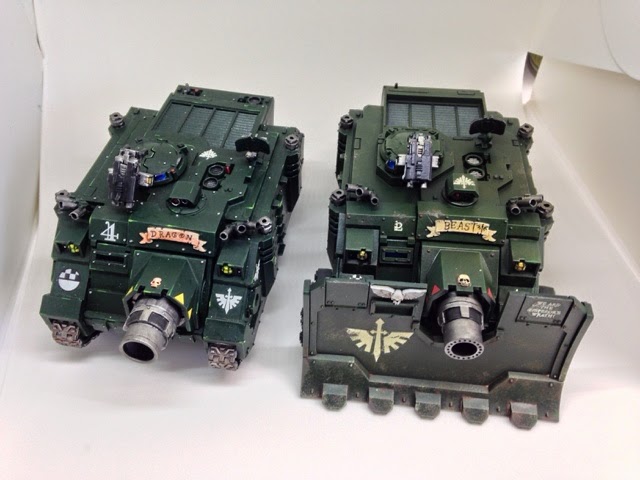 As I was painting up the Dark Vengeance set, I got to thinking of adding to my Dark Angels more. 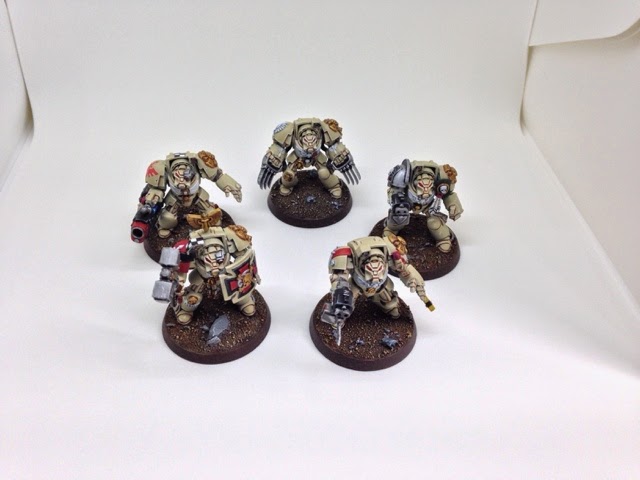 Now, I have all but a squad of Deathwing Knights and a Command Squad to complete my Deathwing. Currently, I have three complete squads of terminators with two accompanying Landraiders.

To make the terminators easier, I sprayed them in three layers, a primer of black, a layer of Baneblade Brown at an downward angle, and then a final coat of Ushtabi/bleached bone (of which I have plenty) from a higher angle. 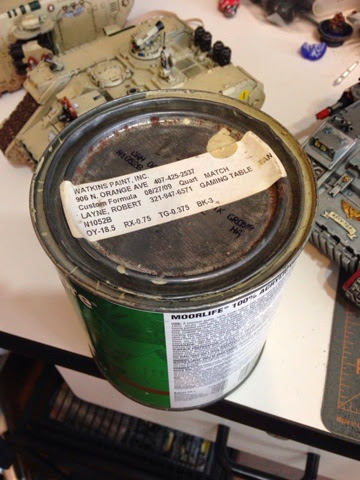 This style of painting allowed for more of a natural shadowing to take place. The next step was a dry brush with Vallejo game color Bonewhite and a final highlight of GW Screaming Skull. I used a brown Micron pen for the crevices   I'm all about the quick and easy way. From there it's just standard gun colors or whatever details added on afterwards. 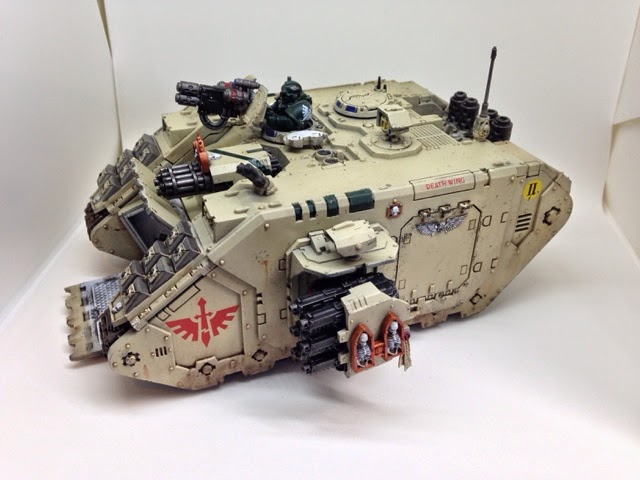 The Landraiders were done in a similar fashion as the termies. The only difference is when spraying on the bleached bone, I ensured that I got a good coat on all the big flat spaces, the tops, the panels on the sides, doors. As you use an airbrush, you don not always get a big spray that covers everything like the cans do. It's a much smaller area that can leave for some of the previous layer to show through. This greatly enhances the shadowing effect. These too were dry brushed just like the termies, just no highlighting or use of micron pen. Then a Glosscoat, decals applied, another Glosscoat to seal the decals, then the weathering. Using the sponge effect, I first added a few spots of Vallejo Ivory for superficial chips. I then switched to GW Charadon Granite/Dryad Bark for deeper chips, trying to overlay the previous layer in spots to give depth. Just like the Chimeras, I broke out the oil paints and applied Van Dyke Brown then softened with thinner and pulled the brush down along the sides to give a rusty rain look. 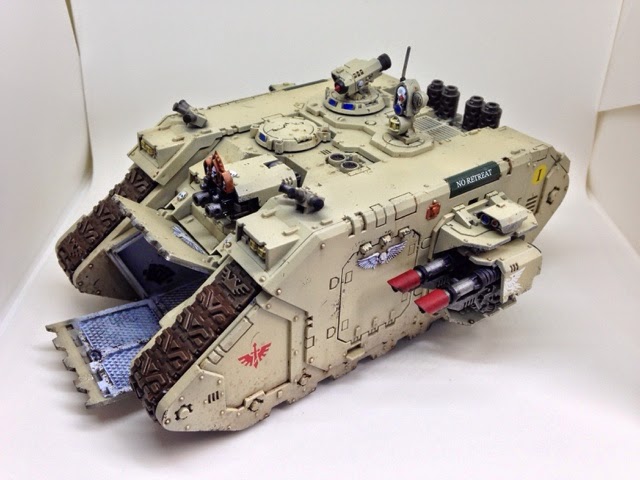 Oh yeah, the interior was painted completely before construction.

That gives me about 2000pts in Deathwing alone before adding HQs. Possibly the smallest army you can field outside of Greyknights.
Posted by color blind painter at 7:56 PM No comments: