I have a quick Battle Report that took place at Coliseum of Comics this past Saturday the 26th. There were 6 entrants; Bretonnians, Dwarfs, Vampire Counts, Two Skaven, and Ogres. They were 2000pt armies. Unfortunately the only photos I took were of Tim Wrights Dwarf army. Besides my army and Tim's all others were mostly black or white primed. A few models sprinkled throughout, but not many. Anyway, the quick and dirty reports.
My army was a hodgepodge of 2 spear armed clanrat units (24 and 40 models), Stomrvermin (30 strong), slaves with spears (27), 7 Gutter Runners, Doomwheel, Hellpit Abomination, two Warpfire weapons teams, and for characters I had a Greyseer, level 2 Engineer, and two Chieftains.

Battle One: Several units randomly started the battle off the table but could arrive whenever we wanted, even turn one. The table was split diagonally. Against Vampire Counts with only three units. A five model unit of Wraiths, a 60+ unit of Ghouls with regen and poison, and a large unit of Grave Guard with great weapons. There were three characters, a level two necro, a level two vampire (general), and a Wight as the Battle Standard Bearer. The Hellpit died to the grave guard, the large unit of skaven killed the grave guard, the slaves died to the wraiths who died to the smaller clanrats through attrition. The Stormvermin tried to avoid the huge block of Ghouls but eventually succumbed after two turns of fighting. I lost the victory points battle in a Minor Loss.
Highlights/Lowlights: My Engineer got off two Scorch spells onto the Ghouls killing about 30 total but not enough. M Greyseer tried to remove the lined Wraiths with Cracks Call and got three of them before being zapped by the Doomwheel and strength 2 shots.... very disappointed with that. I was able to take out the Necromancer who was hiding behind the Ghouls when a warpfire shot overshot the ghouls. The Mob was just too big to take out.

Battle Two: The Maw, Attacker had to split his army onto the two short table ends, while the Defender must setup within the middle 24" of the table. The winner was determined by Table Quarters. Fighting against Dwarfs with three units of gunners, two guns, a cannon, two large blocks of Slayers, and a General on an Anvil. They were split with gunners on one end with a gun. The other side had the slayers, the cannon, the other gun, and the Anvil. My setup was  heavy to the gun side hoping to engage within the first or second turn. Only the large block of Skaven and Doomwheel facing the Slayer side. I was able to squeak out a Minor win. 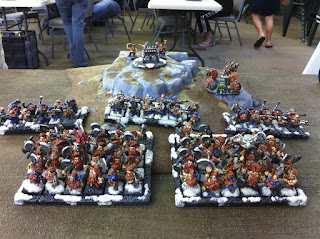 Highlights/Lowlight: The first turn of shooting was very effective for the dwarfs, almost wiping out the smaller Clanrat unit. The Abomination ate up two units of Gunners and made about 10 regen rolls out of 14 from one turn of shooting! Large unit of skaven got flanked by Dwarfs sneaking through a forest who lost 8 guys to dangerous terrain, zero to me! A cannon shot landed right in front of the Greyseer and the remaining 5 skaven before it misfired allowing him to live and eek out the minor victory and challenge the table quarter.

Battle Three: The battle was fought over a central 'Well of the Gods' that offered up goodies to the armies. You get bonus points of you do not partake of the well. Both players failed that. The opponent had Ogres with three units again. Two huge units of Ogres with a small three man of Ogres with greatweapons. All characters were in one unit of Ogres with some banner that increases miscasts on doubles.
I hoped to have my Doomwheel take out the small unit and sweep around while I whittle down the other units.
Highlights/Lowlights: My big block of Skaven got ripped apart in one round after the big block of Ogres w/ characters reformed and moved 21" to move right in front of my when I was on their right flank! My Doomwheel almost got destroyed by the small unit of ogres until my turn it conjured up three strength 10 shots at the Ogres and took them out! One weapon team malfunctioned and ran right at my Engineer to kill him! My Greyseer was able to Curse the other Ogre unit and take them out making a five man clanrat squad. My Hellpit alomost took out the monster unit of Ogres w/ characters on a flank charge but was unable to run them down, rolling 5". I lost to victory points, badly!

Overall, I took Best Painted. Tim and his Dwarfs was Best Sportsman, while Thor won Overall Champ with his Vampire Counts. It was fun and I learned much. Since I only play once every 3-4 months, I was happy with how I did.
Posted by color blind painter at 9:49 PM No comments:

Sorry there have been no updates. I have been busy studying for tests. The results of the studying are positive as I passed the Comptia Network+ Certification exam. I will be updating more pics of skaven in the next few days. As well there is a fantasy tournament this weekend at Coliseum of Comics that I plan to attend. I will grab some pics from there as well. Wish me luck!
Posted by color blind painter at 11:17 PM 1 comment:

Bolter n Chainsword keeps asking about my Luna Wolves. I painted these up a few years ago for a contest held by Coliseum of Comics in Kissimmee. I was fortunate to come out the winner. They are based upon the cover from the Horus Heresy novel, False Gods. I only painted up the five guys.. I posted them originally on Bolter n Chainsword and received several requests on how they were painted. The basic, quick 'n dirty way is this: based in white, given a very thin wash of matte medium/codex grey/water, highlighted with a thinned white, then black or red where needed. The hardest part was getting the decals. These are from the Bell of Lost Souls site, and worked out quite nicely. I will provide links to all three above listed sites at the bottom of this post.

Right, I said I would do a tutorial on how I painted up the little rodents. I now present to you the skaven tutorial.
First off, I primed all of the little guys in black. As they are going to end up being rather dirty, dingy, and for the most part dark, black is the way to go. I sprayed them with Army Painter Black. This stuff is great. Very good coverage and comes out with some strength. I highly recommend it. I used to use Testors to prime them with, but Army Painter is extremely good. 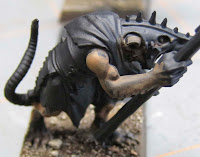 Here I have given a rough covering of Calthan Brown to the fur areas.I paint in layers to the model, skin first, then the next layer up, armor or clothing, then the next, and finally what ever may be on top of those layers. It is much easier to paint interior items when you don't have to worry about getting paint on the layer above it. If you follow the steps properly, you can avoid having to reach the paint brush in to tight spaces having to avoid dabbing any already painted edges. 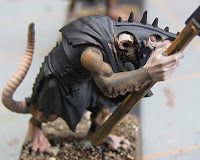 Anyway, the next layer I had was the skin, the actual flesh. I had this meet up with the fur I put on previously. This will join when the wash comes down. I used Tallarn Flesh for the skin color. I have also painted the spear shaft with a Bestial Brown 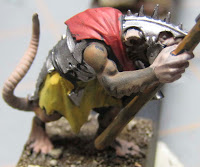 Here I have already put on the yellow, red, and the metal. I used Iyanden Yellow, Mechrite Red, and Boltgun Metal. The model right now could be used in a regiment. For me it is only half done. It hasn't taken long to get to this stage; as I have only used 5 colors not counting the priming or the base. 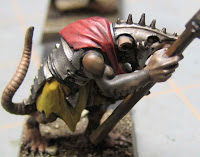 I have just give this skaven a wash with Devlan Mud. This will tie many of the colors together. You can see this on the hand where the fur and the flesh meet. As an added bonus, the wash will creep into crevices and folds as it dries to give a shade to those locations. 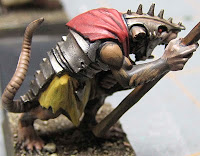 Again, you could field him as he stands now, but to get a good effect with your models, you really want to have three layers to each color. The whole base, shade, highlight theme. Since I already have the base down and the shade as well, I need the highlight. I simply went back with the original color for each location and painted along raised edges or areas that will catch the light better. You can see the hand is looking much nicer now, more subtle and somewhat realistic for a ratman. 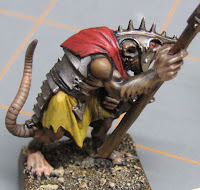 Finally, after the paint has dried, I sealed him with a gloss coat first for strength and resistance to chipping, followed by a dull coat. Both of these were sprayed on using Testors sprays. The dull coat for Testors is one of the best out there. I will say, the sprays will basically re-wet the paint underneath it which will again create a fusion of areas, tying them in again. It's rather nice to get that effect. It can also be a pain if you had just gotten it perfect and the spray ruins it. I plan ahead and expect it now. That is one of the reasons the Heavy Metal team at GW doesn't spray them.

So that is it. What was that 7 colors, fur, skin, armor, hood, skirt(?), shaft, and the wash. All GW colors and most of them Foundation paints, mainly for their coverage ability. They can go over black, or any other color, with one coat. Thanks, comments are welcome!