This one can be the boring post. Transports are rarely exciting. They fight through the fire to deliver their cargo. And much like a male spider after it delivers its cargo, they tend to die or get ignored. 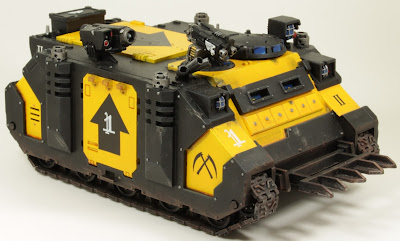 Even still, I tried to make them look good!

There are only two Rhinos currently. If or when I enlarge the company, there will definitely be more vehicles. I just have to remember most of the heavy tanks have been lost so I will avoid the Land Raiders and Predators. 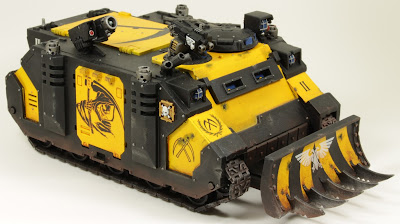 Should the Company Commander decide to ride, his wheels are suitably ready and unique in its adornment. The Grim Reaper is from a US Navy insignia I found on the internet. Using Photoshop, I resized it a bit and reversed the colors where all the black was clear and yellow was black. It is able to stand out nicely as a command Rhino. 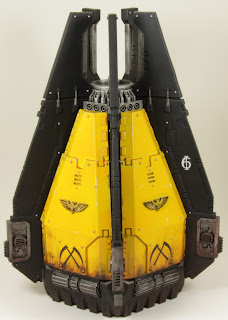 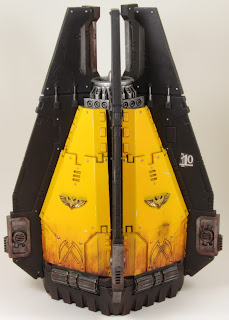 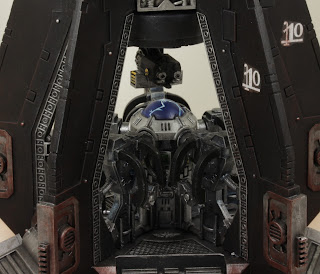 I must say the Drop Pod kit looks great when finished, but it is a pain to put together! Why couldn't GW just put some pins in for the vanes to slide into? The entire process was extremely frustrating. Almost like they rushed it or a non-modeler built it on the computer. In order to get it to look good, you also have to pre-paint much of it before the final build. That's where I tried to do the electric look for the sensor dome or machine spirit. The Drop Pod is quite easy to paint up. Dry-brushing goes a long way with this item. 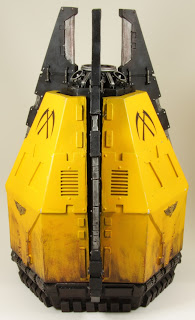 The last transport is for my Ironclad Dreadnought. I should have placed a picture of the two Drop Pods next to each other so you could get an idea of the size difference. The Dread Pod is fat with only three doors. A Dread base can just fit inside the Pod. Mine will not completely fit due to the Hunter Killer missiles on top. You will see him in another post soon. The Forge World Pod was much easier to build and is more stable than the plastic one.
Update! 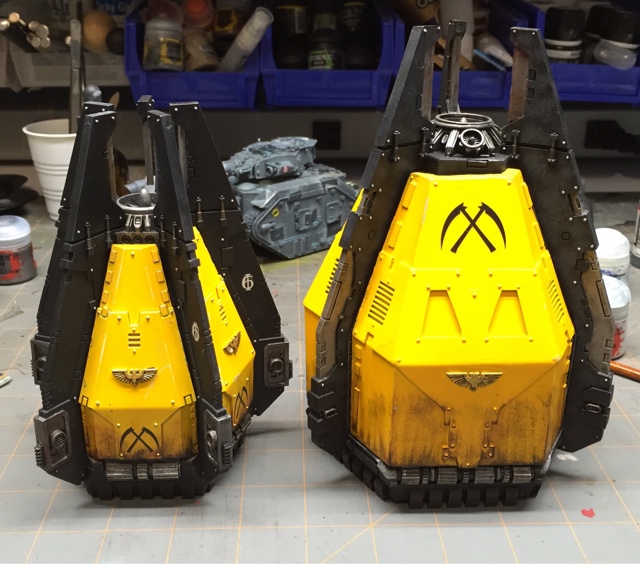 You can see the Dread Pod is about twice the size. You may also see in the back my latest WIP 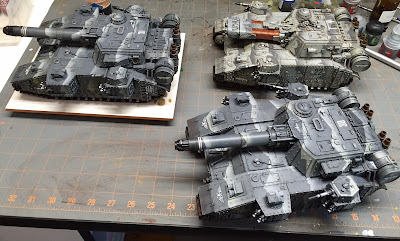 I have finally completed the three Superheavies for the Bolter and Chainsword ETL IV. This should be a big lift for the Astra Militarum subgroup. These three were over 1500pts in total.

Much like working on twenty guys at a time, working on three vehicles of this size at the same time was getting to be more of a chore; quite unlike the usually joy of finishing a single squad. As each step of the process was increased three-fold for every vehicle. Doing the oil wash meant having there was no down time between application and blending. It was almost too much to keep track of. I did have to go back and get some spots that I missed along the way, like the purity seals on the rear of the tanks. Beyond that, it all went fairly well. 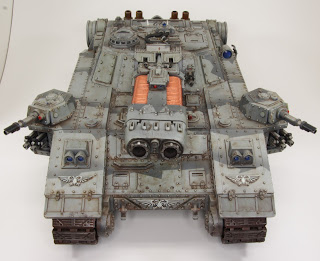 The Stormblade pattern superheavy carries the Plasma Blastgun. As this was the lighter in color of the three, the weathering really showed up very well. Except for the fitting of the gun, there were zero problems. I used a long brass pin to help keep the gun in place. Even still it didn't sit flat enough. It's not something that would be noticed during gaming.

The Shadowswords came out nice too. Contrary to the above photos, they are the same colors. I'm still learning the camera.

I had to paint part of a 'three' onto the side to avoid it getting lost by the ladder. It was something I realized after I did the other side first. I just thought the numbers looked better near the back of the tank. 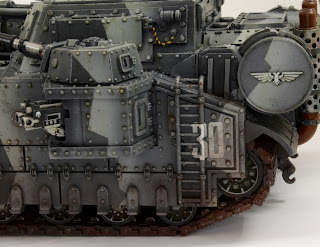 The weathering for all three was pretty much the same as the Macharius, Punishers, and the Sentinels. I did use the Van Dyke Brown oil paint for the pin washes. One thing I did that worked really well was, I pre-highlighted all the raised parts with a lighter color. All the rivets were painted a lighter grey. All the raised parts got some level of a highlight across all of the tanks. This really helped those parts stand out and help with the depth of the paints. 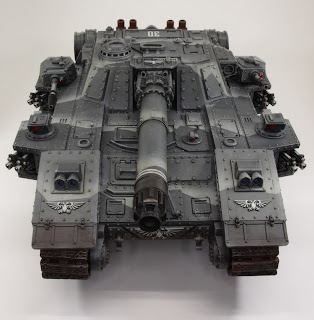 Only one thing gave me an issue. I tried to use the Mig Productions Rain Streaking effects. It comes in a bottle just like the Rust Streaking and Grime Streaking effects. It even has the same directions. I planned to use it as a way to fade the upper layers. The process is normally to put down a spot, wait a little while, then blend it with a brush and thinner to spread it around. Simple and very effective. Well, the Rain Streaks may have too much pigment in it. Placing a dot on many of the panels across the top of the tank 31, I then proceeded to blend it around with a damp brush. Problem was, it was leaving a ring where the dot was placed. It was drying too quick and making it look like a cheetah! I had to soak a Q-tip in thinner and practically scrub the Rain Effects off. The stains are still there, but when another layer was added and blended, they began to disappear.

To get it to work, I used two brushes together, one with thinner, one with the Rain effects. I placed a spot of thinner down, then the Rain Effects on top of that. I then blended it in immediately. This worked to make the paint look faded as a light translucent layer of a white was laid on top.

After completing the painting, they all got a coat of Gloss spray and then Dull coat from Testors. I used graphite for metal marks on the rust and tracks. The following sprays caused them to disappear. I just went back over them with Leadbelcher.  So don't use graphite if you are going to seal your tank.

A small post this week, a teaser.
I am still working on the three Superheavies. The weathering is coming along great. I would say I am half way through the weathering process currently. The powders will be going on shortly and the lenses will be done last. 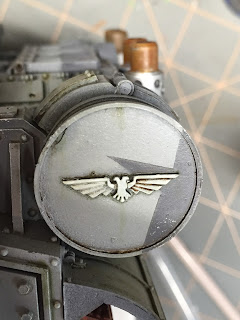 My wife an I live in a wood frame house. In Florida, it is termite mating season. After a rain during the day, the termites tend to take flight in the night. The tiny bastards are attracted by light. We have been turning some of the non-essential lights off in order to not attract the damn bugs! As soon as the season is over, I will be back to working at night and getting more done

Posted by color blind painter at 6:51 PM No comments: 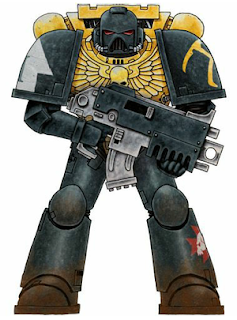 The Scouts may be the most numerous of members of my Scythes of the Emperor, but the graduated Space Marines are the backbones. Going with the theme that either they are rookies or veterans, my Scythes have two squads of Sternguard Veterans and one squad of regular Marines.

This is the regular squad. They tend to ride in a rhino transport. Why a multi-melta? Cheaper than a lascannon and still good at putting a wound on a Tyranid monster. Usually don't have to worry too much about range. The bugs tend to help you out there just fine. The Sergeant has a power pick for a weapon. I claim it as an axe ahead of time. The pick was a nasty anti-armor weapon back in medieval times. So, it fits just fine with the armor piercing of a power axe.

You can also see redeemed Lamenters amongst the unit. As the Scythes were assigned to oversee the Penance of the Lamenters following the Badab War; the Lamenters suffered heavily during the Kraken invasion. With the overall decimation of the Scythes Chapter, any surviving Lamenters amongst the Scythes number deemed vindicated were incorporated into the existing Chapter. I am sure the Inquisition will have questions regarding this action. Yet, it can be easier to ask forgiveness than permission considering the situation the Scythes current face. At the least, his gene seed may not be saved if it ever comes to it.

The first of two Sternguard squads is displayed above. The squad is made up of a mix of metal and plastic Marines. This squad has combi-meltas and a heavy flamer from a Terminator. The Veteran Sergeant is equipped with Lightning Claws. Usually deployed via drop pod into the middle of the enemy to draw them away from the front lines and to just cause as much damage as possible. There are only nine guys in the squad as a character sometimes deploys with them. They are great for chewing up Tyranid Warriors. The unit has successfully been used to alpha strike a Hive Tyrant leading to a complete disorganization of a Tyranid assault.

The last Space Marine unit is the heavy weapon Sternguard. I will combat squad this unit with the heavy weapons staying behind leaving the Veteran Sergeant and comrades to provide forward cover. It's also not too difficult to simply leave them all combined and shoot Kraken rounds too. It's difficult to see, but there are also a couple of comb-plasmas in here as well. I know it is not a standard use of the unit, but again, I play more for fluff.

Many of the plastic figures are modified to have service studs on their shoulder pads. The pads were made with Testors putty filled across the entire face then left to dry overnight then sanded smooth. With a pen, I chose several locations for the studs to go and lightly drilled into the putty with a pin vise. The studs themselves are tiny silica beads. You tend to get them with items shipped in boxes. I left a dollop of super glue on piece of paper, using a toothpick, I put a touch of the glue into the drilled hole. The silica bead was then carefully pressed into the hole.

Some of the battle damage was a result of the pin vise drilling and the putty chipping off on the shoulder pads. Other was created by simply hitting the model with a file. Since the figures were primed in white and then yellow over the top, the file tends to show the white primer and the grey of the plastic underneath. This looks best on the black armor locations.

Each of the figures are individual with alternating color schemes and decal usage. Normally I make my Marines uniform per squad. Each one using the same numeration and symbols. Since many of the Veteran Scythes survived the Hivefleet attack, the disciplined rules are a bit more lax.

Now being colorblind, I never knew the lining I did on the yellow was red. I originally thought I grabbed the brown micron pen. It wasn't until the Necronomicon Tournament that I was told, 'I like how you used the red for the lining.' Aww, crap! Even still I can't tell it's red.