In order to create space in my backlogged inventory, I have been working on the many kits that I have accumulated over the years. I am now working on some Russ kits I got back when Apocalypse came out. GW had a great deal on a three Russ squadron for $100 or so. Sucker me, I picked it up even though I didn't have an Imperia... Astra Militarum army. Anyway, these kits are for other variants that I will post in the near future. What I have finished recently are a pair of Punishers. 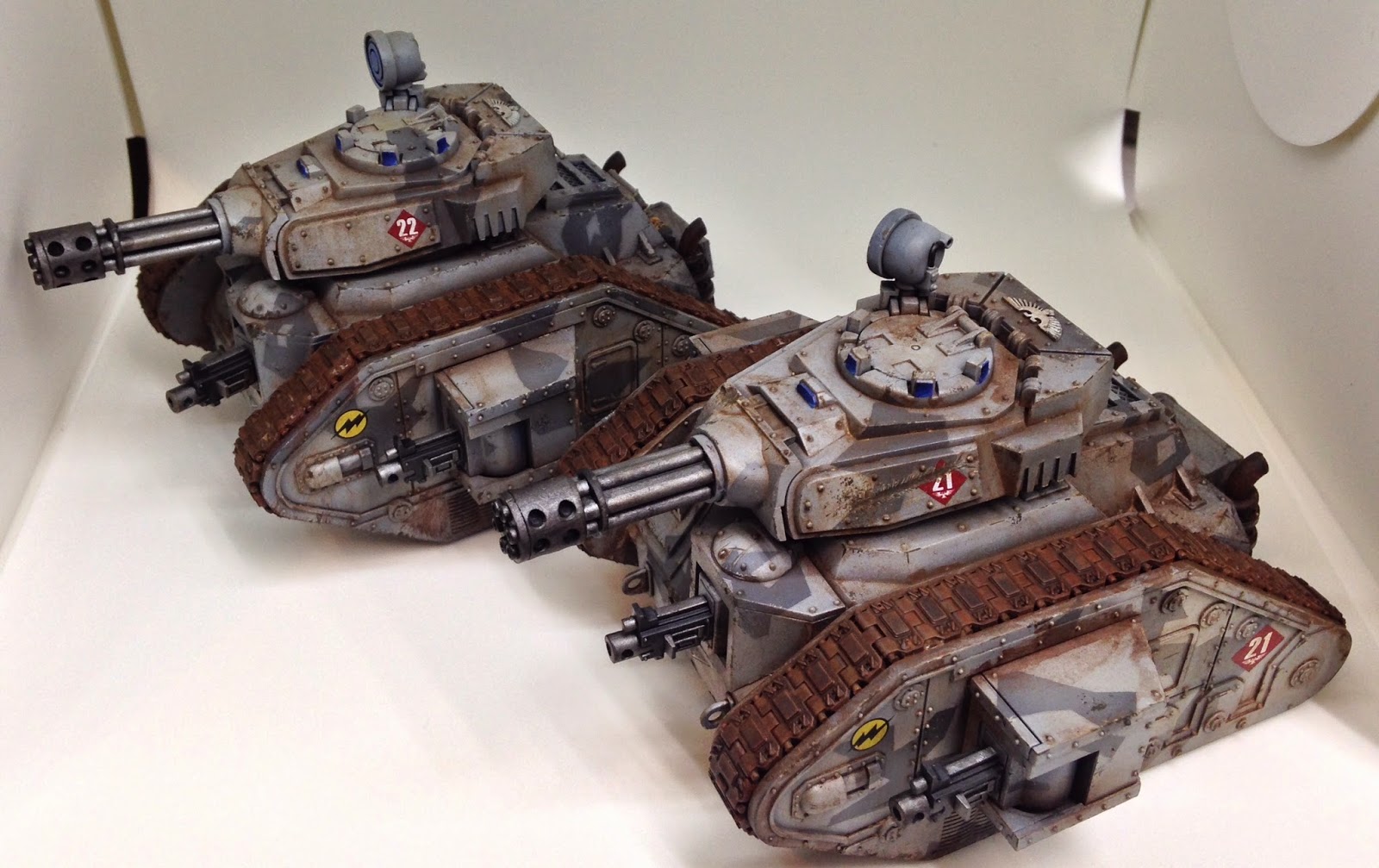 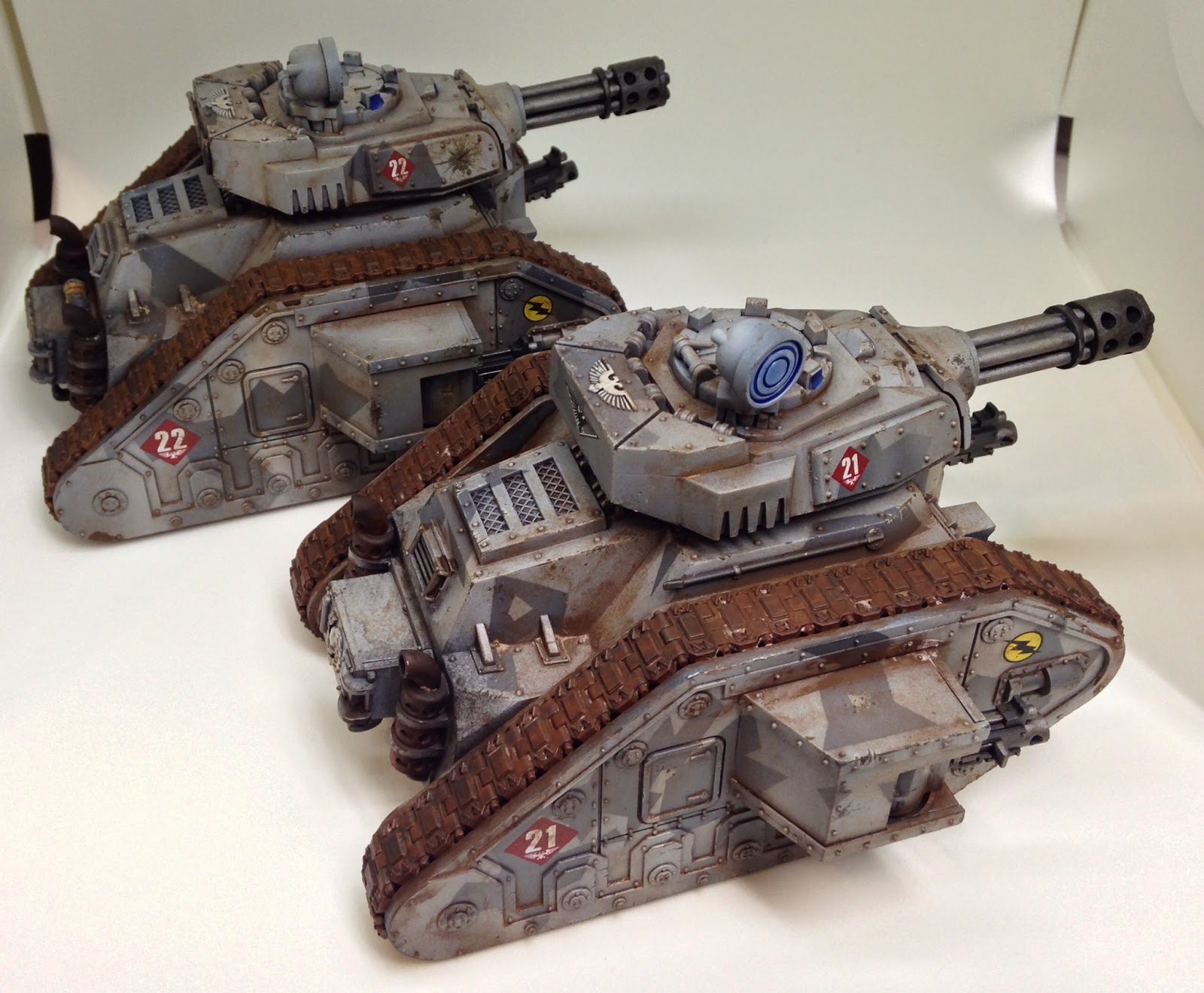 Everybody was in to the Executioner with its plasma cannons. I thought the Punisher was getting neglected. Besides what help the Militarum more than multiple shots, besides twin-linked? These have been sitting on my shelves for a couple of years before I grabbed them and put them together. 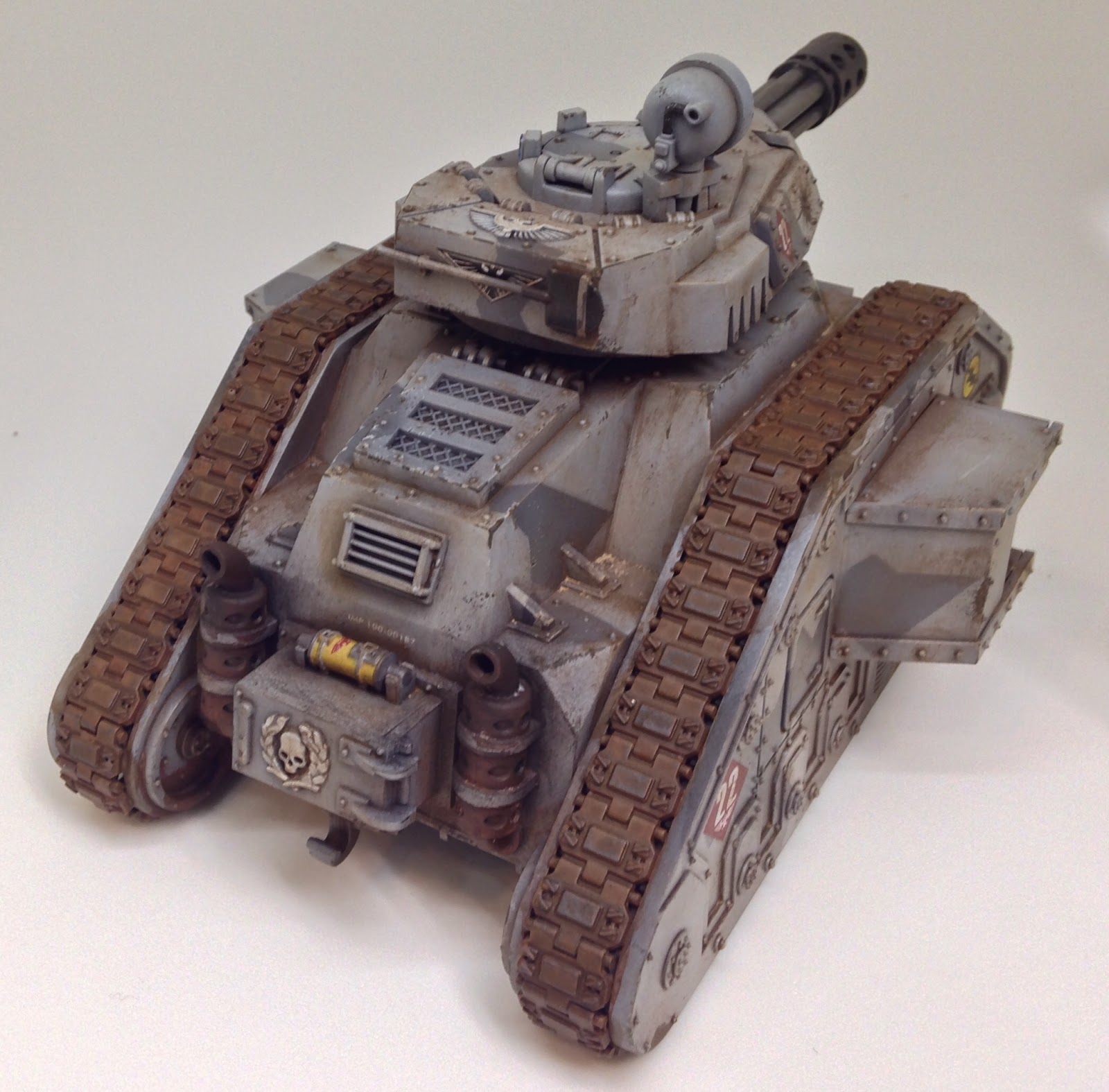 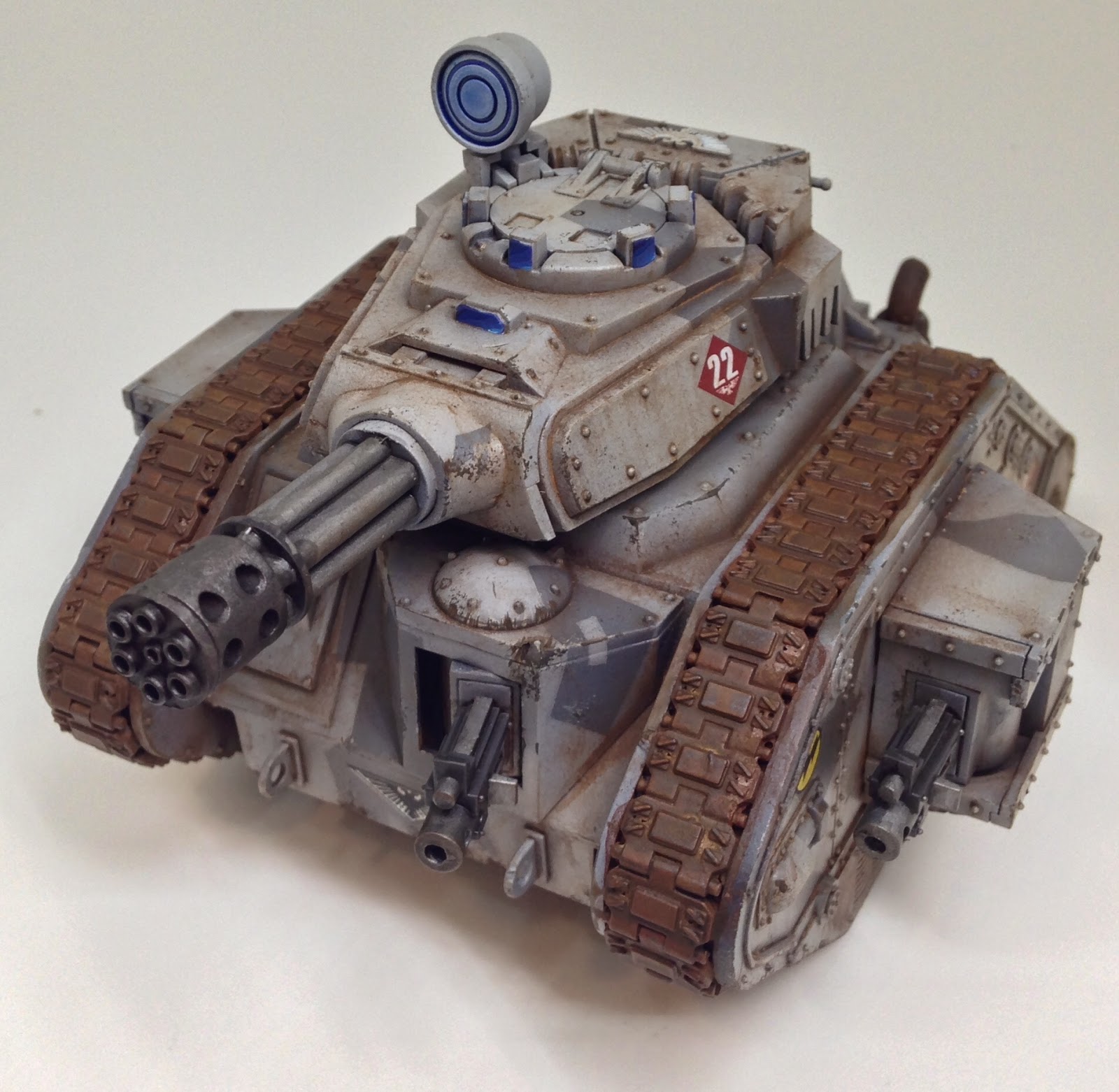 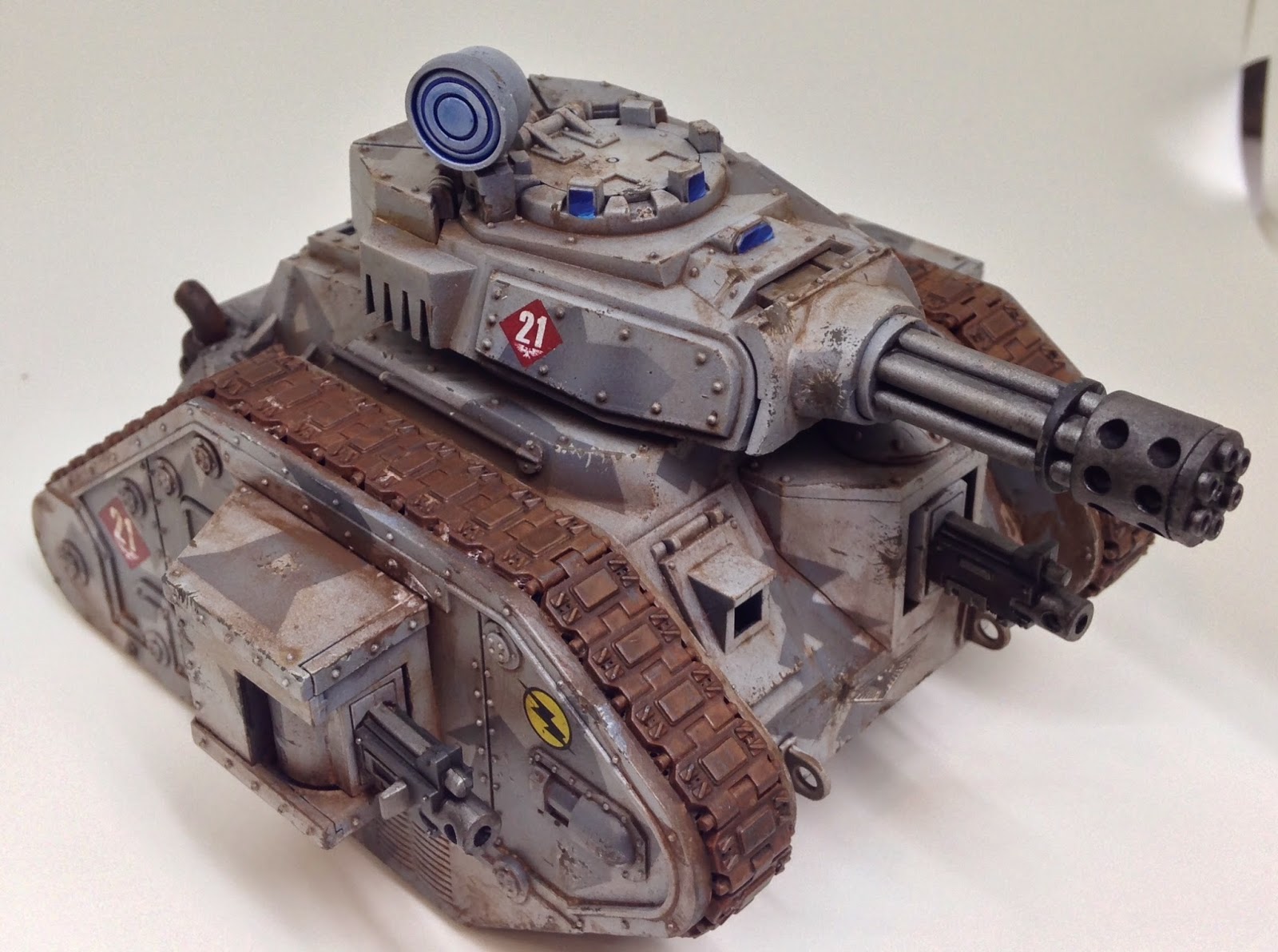 I went for a bit of Urban camo for these guys. They were primed black as usual, then Mechanicus Standard Grey. I added a touch of a lighter grey and hit the larger plates and sprayed vertical lines down the side for some pre-weathering. I then added some irregular shapes cut out from my Tamiya tape. Administratum Grey was then used. A touch of Pallid flesh (now Wyche Flesh) was added and again hit large open areas and added vertical stripes again, but trying to hit the same stripes I used for the darker grey to enhance the effect. It's difficult to see the result as it's quite subtle. Then decals, base colors, a coat of gloss spray, then the weathering. 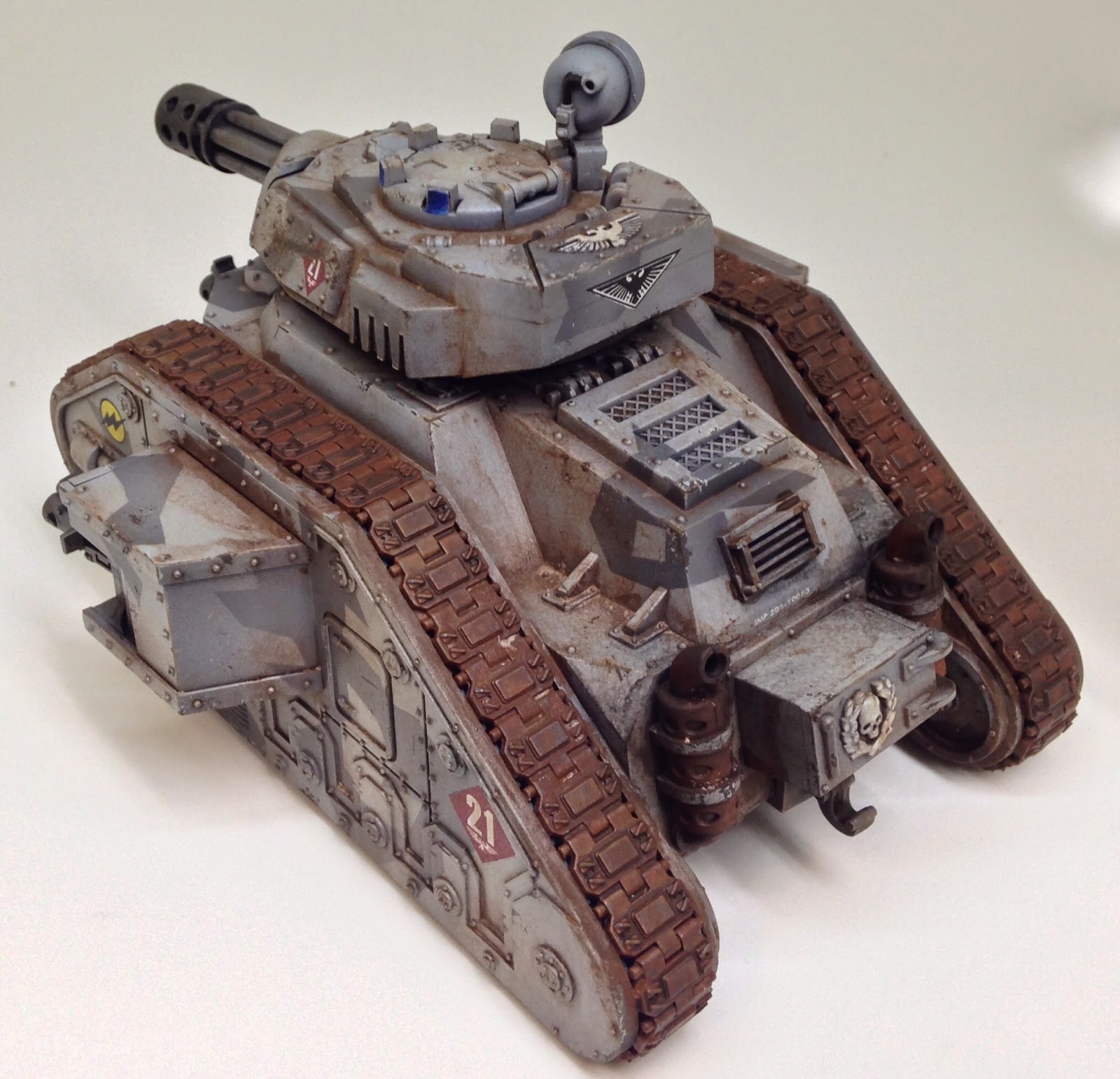 Just as for the Macharius, I followed many of the tips from the Forge World book.

Posted by color blind painter at 1:12 PM No comments:

A good friend of mine, who is also a World War Two buff, really likes the North American P-51 Mustang. 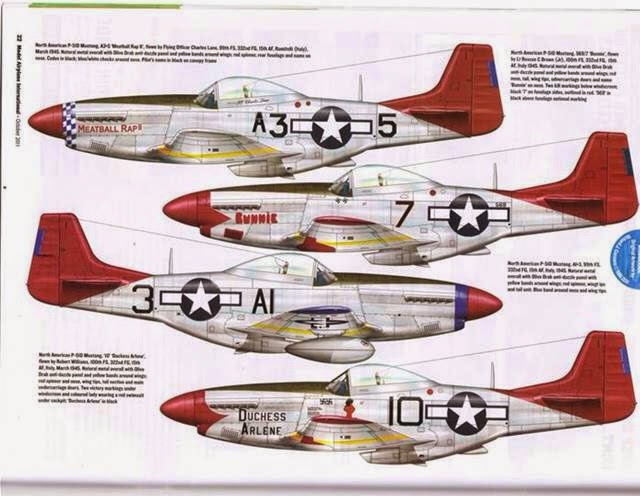 For his birthday, I decided to put one together for him. I gave myself a week to complete it. I haven't done an historic model for some time, so this was a challenge of sorts. I grabbed a Tamiya kit. I always remembered Tamiya to be of high quality way back when. 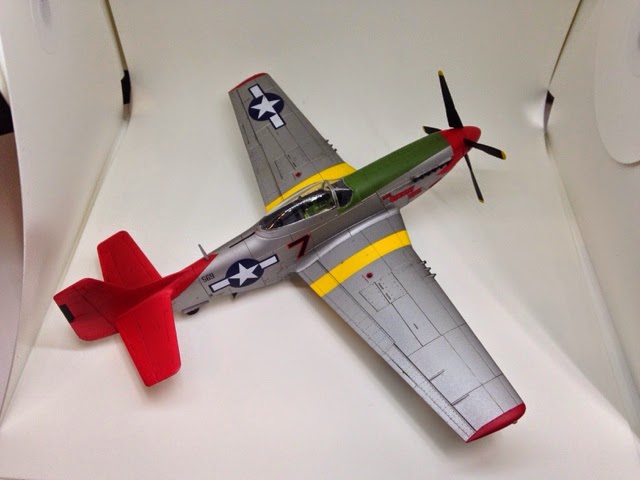 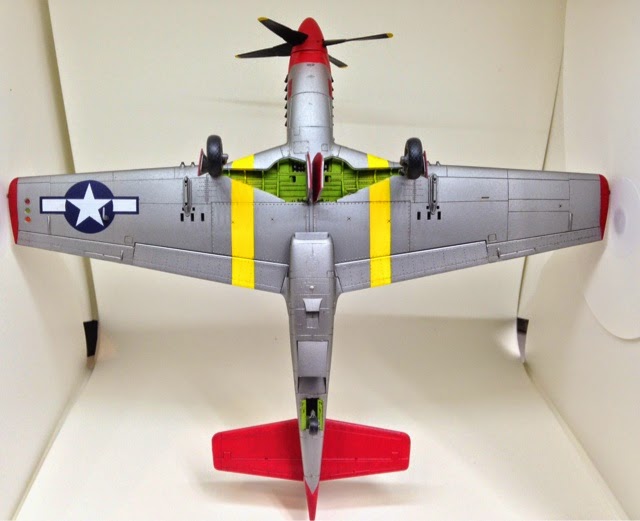 First off, it came out pretty good, not knowing. All the yellow and red was airbrushed, along with the green. The kit came with decals for the yellow stripes and red nose, sans propeller. I decided it was best to paint most everything, as trying to match a decal color will most likely not work. The yellow was eyeballed. The red nose, I just cut out the decal and made a stencil with some Tamiya tape.  The tail was taped off also. All the interior work was done by hand, cockpit, wheel wells, etc. I also didn't have a basic Olive drab for the nose. Probably came out too light to be accurate. I probably should have used a brighter/lighter silver, but I'm pleased with the overall result.
After researching some photos online, I must say the model has some flaws. The kit is more of a beginner package with basic colors listed for the cockpit interior    2-1 yellow-green for example. The landing light inside the wheel well seems quite large too. The landing gear also seemed more fragile than most. 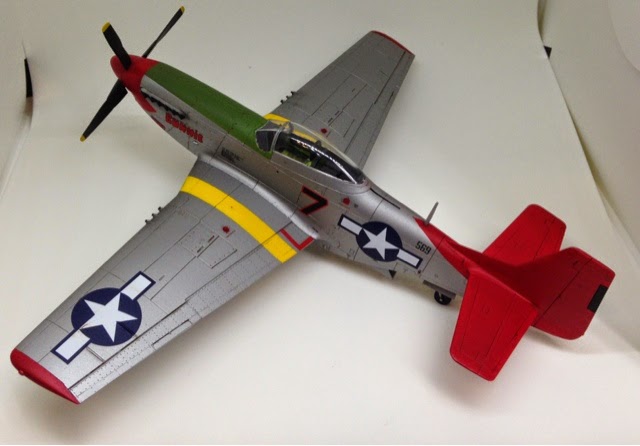 Decal-wise, the wing insignia had to go over an airspeed indicator on the bottom and a raised slot on the top. I can't say I succeeded with the top, the most visible. I wasn't thinking ahead, didn't realize, and tried to muscle it on there, failed. Fortunately, GW Midnight Blue appears to be a great match for the USAAF insignia blue! The bottom, I knew about and slit the round part about a 1/4" and slid that around the indicator before pressing out the bubbles. I was disappointed it didn't come with kill markings though.
What I did like was the pre-cut masks for the canopy that was included, bonus! Prevents unnecessary cuts onto the clear plastic. The instructions gave nice diagrams for parts placement and pre-construction painting. It was a nice easy model to assemble. I would rate it 7 out of 10 with 5-6 being average.
Posted by color blind painter at 6:07 PM No comments: