Merry Christmas or Happy Holidays or Whatever You Want

Here's an oldie that I came across the other day! 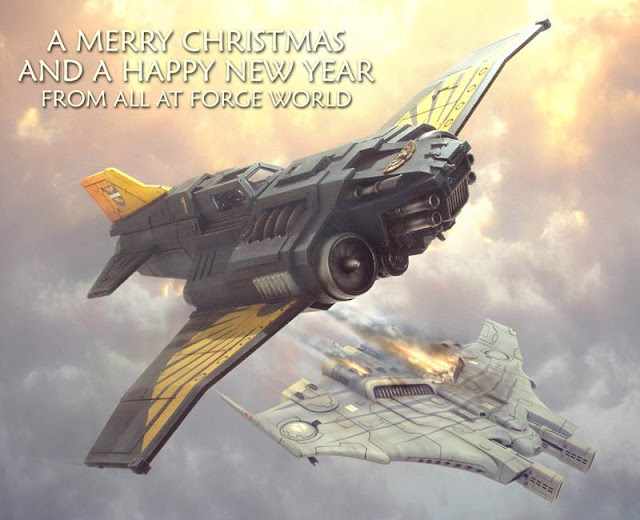 Posted by color blind painter at 8:49 PM No comments:

I have always loved weapons that do not allow for armor saves. It takes one less chance to escape, away from the enemy. My 9th ad 10th Squads reflect that idea with their armaments.

Back in the day, my first Devastator squad was armed with one lascannon and three plasma cannons. It didn't cause any issues on the field, because I rarely played them. So, I never expanded them beyond the requisite sergeant and the gunners. Back in the 3rd edition days, the Devastator squads had to pay double for their heavy weapons. That is the main reason why they almost never saw the field among Space Marine players. 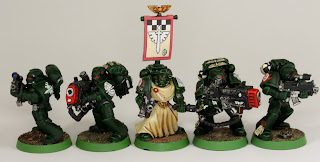 I slowly expanded the one squad into two 5 man squads, one with lascannons, and the other with just plasma. Even then, they were still underarmed as I never added the fourth plasma cannon. It wasn't until much later that I added an extra 5 guys to each squad to make them full 10 man squads.

Half of the two squads are my wave one guys. The rest are all wave two marines, but backed down to fit in with the rest of the unit. If you look at the plasma cannons, you can probably figure out which one is the newest. You may also figure out which las cannon gunner is the original.

Anyway, in play, I rarely field them without combat squadding them. The plasma cannons do great when operating in two units of two cannons in each. Four in a single squad really is overkill. With them split up, they really can cover each other pretty well and add a real deterrent to deep striking units or denying objectives.

The lascannon squad can go multiple ways. Leaving them as a single 10 man squad leaves quite a few ablative wounds to make the four lascannons even more durable and dangerous to Riptides, Land Raiders, etc. Splitting them up again makes for two squads of practically twin-linked lascannons  for when you absolutely want to hit them hard. Even squadding one into just 5 standard marines can allow for them to advance and capture or even harass the enemy, while the four lascannons wreak havoc.

So, I have showcased my 4th Company Tactical Squads. This week it is the turn of the Fast Attack Squads. As a former Imperial Guard Player, I always feared hated Assault Squads! They could always get in on my guys in a turn or two. With them jumping from cover to cover, there was little I could do to them, until they showed themselves. When I started making my Dark Angels, I knew I had to have a squad of them.

My first Squad was part of my wave 2 of painting. Not as basic as my first wave Marines, the second wave tended to have more experimentation involved with them. I still created a unified look with these Marines with the same markings and insignia among them. I did mix in some running legs and standing legs, to break up the monotony.

The main thing that sets them apart from my other squads was the Company marking on top of the jet pack and with some of them standing among flat pieces of slate. The Sergeant is actually pinned onto the piece of slate down through to the base. The superglue did not hold well, if at all, with the slate. At this point in time, the Updated Dark Angels Codex had just come out at the end of 3rd edition 40k, so no other options available beyond plasma pistols. Not long after, the 4th edition Marines came out with the flamer option.

The chainswords are actually quite easy to replicate. Paint the entire casing yellow, how ever you want to do it. I then use a Micron pen and coordinate with the teeth of the blade, I markk a spot on the top of the casing and match it up at the bottom of the casing. I step over two more teeth and do the same thing. I then draw a line from the top mark to the one just a couple steps over. I then fill in the space with the pen.

The other squad of Assaut Marines are part of my third wave of painting. Third wave figures cover the period after the Dark Vengeance release. Among the first releases for 6th Edition, the Unforgiven finally got a much needed update to help them catch up with the standard Marine, which later again bypassed them and left them as a poor choice for some time.

I wanted to take advantage of a safe delivery system for my Assault Squad as I added flamers to this squad. By removing the jump packs and getting a drop pod for free, I have an even better chance to position the flamers in a prime position for damage. The enemy must then allocate forces to deal with them immediately, else they have the potential to wreak havoc in their backfield. 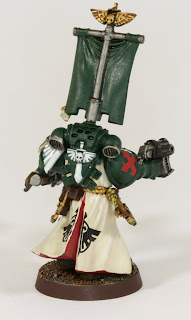 My 8th Squad sergeant has a banner where the 7th Squad does not. The reason is due to aerodynamics. I would imagine a banner causing too much drag, hence the gold static standard on the 7th sergeant.

In gameplay, I love the maneuverability of the jump packs, yet most of the terrain in my area is not conducive for them. The 8th squad has really shined with them dropping right next to the enemy via drop pod, unloading the flamers then holding out for quick reinforcements.

As far as being colorblind, a case in point is the symbol on the right shoulder showing their unit designation, is practically invisible to me. The red symbol is extremely difficult for me to pick out. Looking at just a moment ago, I thought I accidentally left it blank.

Posted by color blind painter at 11:45 PM No comments:

Tooting My Own Horn!

Not in a flatulent sense, but I am tooting my own horn as GW just called me out on their first Advent Day Video! A couple of months ago, GW sent out a cry for assistance to help in ideas for what they can do on their excellent painting tutorials hosted by Duncan Rhodes. I threw quite a few ideas their way. Mainly, the ones that give most people problems or pause. One of the biggest painting bugaboos is White armor!

At about 24 seconds in, Duncan calls out my name in response to 'How to Paint White Scars Power Armor'. This is really good 'primer' video for painting white armor.

You could always cut a step and airbrush the armor in Ulthuan Grey as well. Then proceed with the wash into the recesses, mixed with acrylic medium, followed by the white edge highlighting. The main point to remember is, always water down your white to avoid the clunky, chalky look that can happen when it is too thick. Multiple coats of a thinned white will work.

Meanwhile, I should be getting back to painting soon. The excess work on the house is still not complete. The guy that will be doing, will not be available until January. Until then, I have reset part of the room to allow for some work to be done until then.