Longtime in coming...
I've been busy just not with painting and such. Yet, the latest ETL V over on Bolter 'n Chainsword called to me. I had to get another entry in to assist the Imperial Guard Astra Militarum.

I grabbed a cheap Banblade variant from Ebay and thought it would make a perfect super transport for my Kanak Skulltakers! 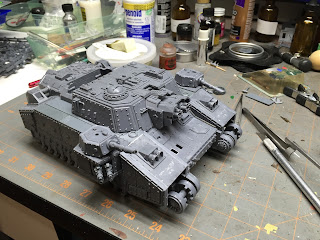 The before picture. A simple Stormlord with some modifications, but nothing outside of the ordinary. I did remove the Imperial Eagles from the front fenders. If it's not obvious now, the Skulltakers are slowly drifting from the Imperial truth!

Throughout, I removed any Imperial Eagles outside of the tracks. The Mechanicus symbol was kept simply out of ease, and the fact that the Adeptus Mechanicus doesn't shove the love for the Emperor down your throat!

A couple of skulls had been added and many spikes throughout. A large Minotaur skull had been attached to the front of the vehicle. A 'raccoon' tail has even been added to the antenna to give it the full redneck look and feel.

The sides where there is quite a bit of dirt and wear, in front of the stubbers, are where I will attach a cargo netting. This will be used to represent the location of the embarkation point for the troops. Currently my wife is working on that part of the plan. The discolored parts are to represent replacement pieces scavenged from other vehicles: damaged bogies, ruptured fuel tank, or simply to repair a damaged skirt. 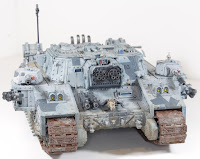 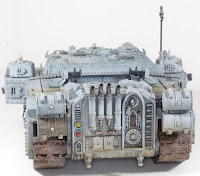 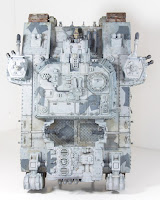 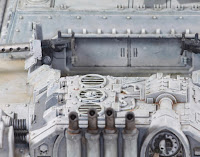 Posted by color blind painter at 12:12 AM No comments: