I have a new unit addition to my Skaven, a unit of giant rats. I am not your regular gamer. I am more of a traditionalist and a fluff player. I don't go for all the killer combos. I just don't see the sport in that or the gamesmanship. My opinion, so don't go off on me about it. Nobody I see uses giant rats, and since I have had many of these guys for over 10 years; I decided they needed a reboot. I have also included some shots of the pack leaders as well.

Here is a shot of some of the old guys with their original paint scheme. I never knew they were too green until my wife told me. I painted up a total of twenty-three rats, nine of them are the ancient ones.

Here are some of the finished guys with their new pack leaders on the right. There are three generations of pack leaders in my army. The really old ones are dated from 1986. Two are from the new box set, and the rest are from the rat ogre box sets.

With eleven pack leaders, I will have extra guys left over with nothing to lead... I guess I need to find something else just to give them a purpose and an excuse for me having painted them all up!
As a finish, I am trying some new things with my 'leaders'. The last two shots on the right are upgraded pack leaders. You can see that their skirts have a band across the bottom. I am getting into the practice of up-painting any leader-type character in my army. Let me know what you think, good or bad.
Thanks!
Posted by color blind painter at 9:34 PM 2 comments:

Yep, these are gnomes. They are from a Ral Partha set, 1986. They put out blisters showing a character's advancement in experience. I went ahead and painted up all three simultaneously just to speed up painting. I wanted to use purple this time and tried some extra stylings with the cloak. Eh, they came out ok, but as you can see, when you zoom in the details aren't that great. Let me know what you think. 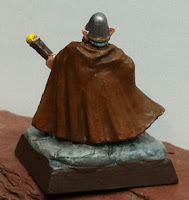 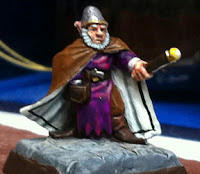 The colors I used are Liche Purple with a Warlock Purple for slight highlights. I tend to keep my highlights subtle. I don't go for the extreme edging as you may see in some minis. I want to keep them realistic, given that gnomes are aren't real, outside of a garden. Anyway, I also used Bestial Brown and Scorched Brown for the cloak, pants, boots, packs, etc. 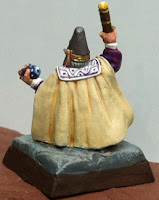 The off white that was used is Valejo Game Color Bone White. It is much easier to work with than the GW one, smoother and better coverage. I used Vermin Brown for the shade. The white was shaded with Astronomican Grey and another Vallejo color, Ivory for the white. Again, the Vallejo went on nice and smooth, no chalkiness that the GW Skull White can produce. 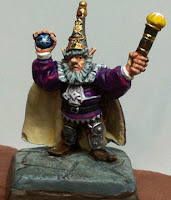 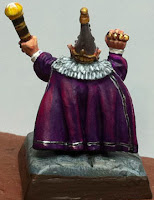 The minis, as most Ral Parthas did, came with a small footprint of a base. I could have cut the figures off and pinned them down, but that would take some extra work that could just ruin the figure if I wasn't too careful. Instead, I just glued them down on to a regular base and added some greenstuff to the level of the base. After that I simply carved some cobble-like grooves into the putty. It came out pretty good. I then put on a layer of Adeptus Battlegrey and drybrushed, Astronomican Grey, then Deneb Stone. Th base was finally given a slight wash of Devlan Mud. 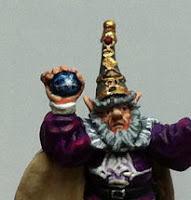 The Orb was a bit difficult and can be hard to make out. My wife suggested something similar to the Vortex Grenade look. That 'look' is akin to galaxy with a lightning field flowing through it. It's something I can do, but at that size, it's a tad bit tough. As for the other details, such as the cloaks, I just out down a think line of silver or black, and carefully dragged the brush down the middle with black or silver.
If you notice, as you look a the mini, he gets more and more elaborate. He gets more rings on his finger, his helmet gets bigger, and fancier and his wand gets larger too. Keep your mind out of the gutter!
Thanks!
Posted by color blind painter at 12:37 AM 4 comments: