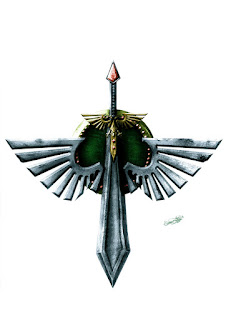 I keep talking about and mentioning my Dark Angels. I've shown snippets of them and such, but not much else. In my downtime, I have taken a few pics of my 4th Company Marines. This is the beginning of their time on the blog.

I started my Dark Angels way back in 2003, after finally giving in and doing a Marine Company. I had been completely sick of Marines being everywhere and beating up on my Mordian Imperial Guard and Order of the Martyred Lady: Adepta Sororitas. I did paint up a squad of Deathwatch Marines previously that I used alongside those two armies, but otherwise I had no Marines at all.

Why the Angels? Everybody had blue, black, grey, or red Marines at the time. I thought about Salamanders, but I just didn't dig their background as much as the Dark Angels. Besides, the Dark Angels give the option of three different armies if wanted, with the Deathwing and Ravenwing added on.

My Marines have been painted in three waves. The first wave was done in fairly generic GW form, painted Dark Angels green, with varying light greens for highlighting. This was when I was starting to really hate painting bleached bone... It's coverage was so bad, yet I persevered. All the guns were done in black as I couldn't stand the red guns that were shown in the original pictures. Anything laser or plasma got a red cowling around the barrel. The first wave Marines were to get me a functional 1500pt army on the table. 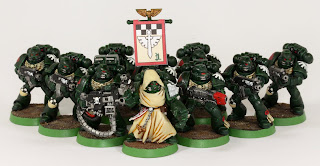 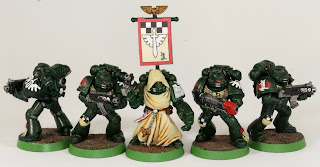 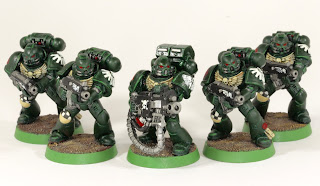 No matter what, each squad was equipped with the same armor, helmets, and backpacks. This was chosen to add uniformity. Every member had their company emblem painted into their kneepad. I don't remember why I chose the right knee. At some point it came about that it was supposed to be their left knee pad, no matter.

A majority of the banners are from The Dark Fortress. A wonderful website for almost anything regarding the Dark Angels. In this case, I printed the PDFs and sprayed the entire back of the page with an old can of GW Bleached Bone. The banners were then cut out and attached from there.

My second wave of Marines started to get brighter and a bit sharper highlights. This wave was to begin to fill in holes that I found in my army. When I build a squad, I don't go for the magnet route. If I need a Marine to have 'x' weapon, I will build a guy with that item. Or in these cases, I just build another squad.

With the fourth squad I started to give the individual members different items or emblems. While keeping to the same helmet, chest, and backpack, I switched up the squad insignia. I stretched myself some with this squad, the Marine with the empty bolter using his pistol. One with a bolter strapped around him. The fourth squad is probably my best but not my latest.

The third wave of my Marines came about with the Dark Vengeance box set. At its release I had completed squads 1st thru 4th, 7th, and half of 9th and 10th, a little over half. Painting up the Dark Angel Squad from the box put me close to finishing a complete company. 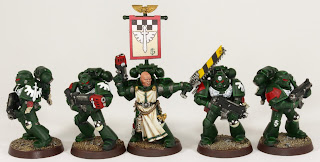 When the box set came out, Games Workshop had already dropped their Dark Angels Green paint. Since they couldn't trademark the name, they created a new color, Caliban Green. These guys re not painted in that color. I found it too 'off'. I used the Army Painter Dark Green for the third wave models. Still, it does not match up. I was also more subtle with the edge highlighting; that could have been a mistake. Especially with the 6th Squad, where the highlights are too subtle. The sergeant for the 6th Squad is an old special release that GW had for a while.

Sorry, the craft room is still under construction. The light is starting to grow at the end of the tunnel as we have a person who can/will complete the trim that the framers were unable to do satisfactorily. I am hoping by the time Thanksgiving comes around I can get back to work. I am getting a bit stir crazy, which is why I am putting stuff up on eBay. Please follow the link to see the sales.

Here are a few things that I have going up tonight that may interest some:

I may post some more pictures of the Dryads. They were something that sat on my shelf for about a year as I just couldn't figure out how to finish them. Finally, I just pushed on and added paint letting things build and flow naturally.

Posted by color blind painter at 8:37 PM No comments: