I painted up the Screaming Bell not long after the Warp Lightning Cannon. I pretty much followed the same steps as that process. 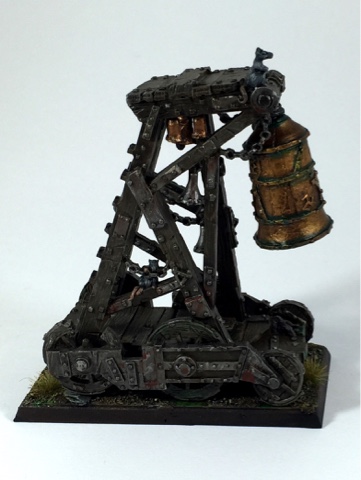 Currently it will be up for sale starting Wednesday of next week with a starting price of $20.

The accompanying Grey Seer was painted up waay back in 2011 in the Action Poses post. He will not be included in the sale. I may sell him later on, but for now I am keeping him. The bell ringer is also staying in my household for now.

A couple other items I will be posting are some Rat Ogres in groups of three. All of the rat ogres were done up back in 2011 for reference. 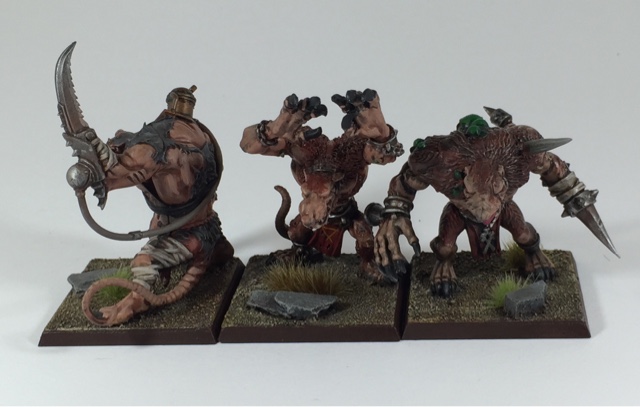 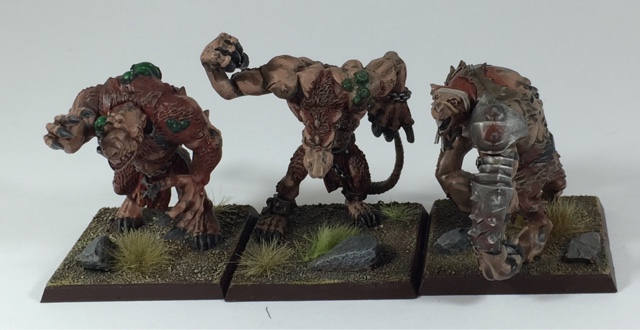 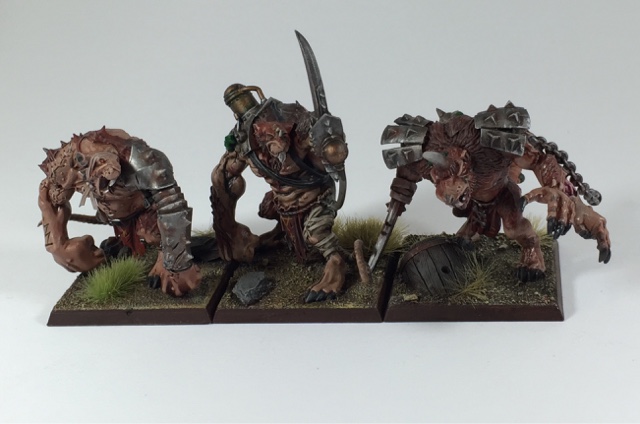 Here a few before pics of some of the beasties. The old rat ogre were such ugly sculpts. To add to their ugliness, GW hadn't really figured out a way to make hairy models fit properly with multi-poseable arms. That is why you see the greenstuff on the arms. I had to fit them on without looking so bad. 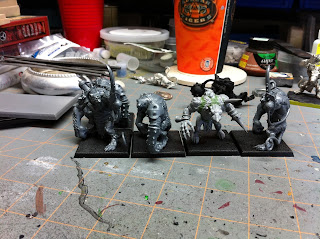 GRRR!! I must eat the bunny! A small rabbit I made with leftover greenstuff for my wife. Which was then hastily eaten when by the monster when I turned away... 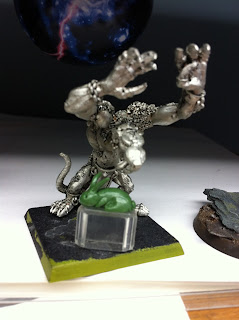 This guy was created by my wonderfully talented friend Mike. He just doesn't have the time to paint anymore, especially with a child now. This was his guy he built for Mordheim. Being that he was all metal, the extra arm from Ghazaghkull Thraka  and the spiked ball had him doubling his weight. I definitely should have weathered the shoulder pad more back then.... 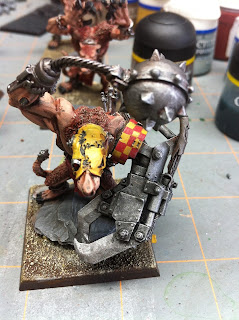 And the Doom Flayers I put together some time ago. 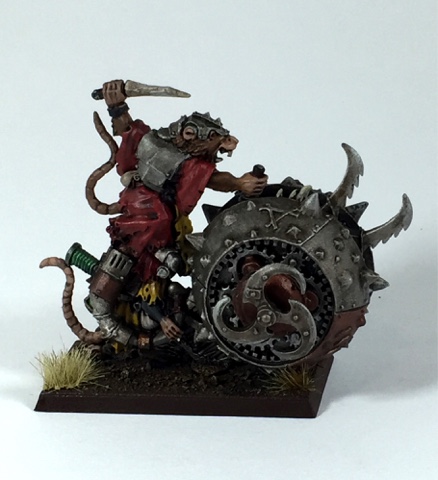 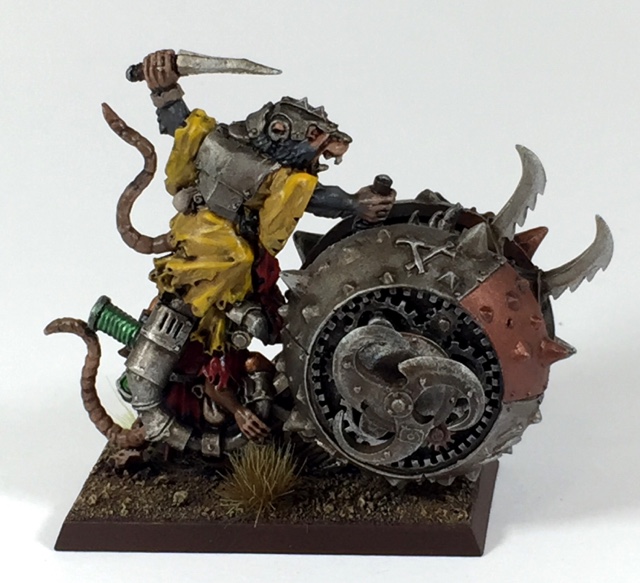 It has been a while done my last post. My craft room is again under construction due to re-plastering and other annoying repairs needed on the house. We are hoping that it be completed before Halloween. It's been ongoing since February 16th....frustrating is the key word here. There were times that we thought it was completed, I got some stuff done during July/August. Then it was discovered that some of the framing was rotted and needed to be replaced. First world problems here! 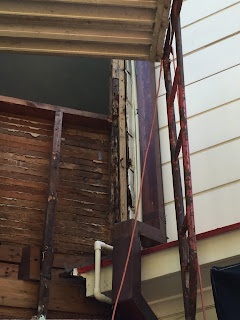 So since then I've been grabbing things I no longer need or want and throwing them on eBay. For example there is this walled farm house I am quite proud of. Excepting the streak on the farm house roof. A bit of wash got loose. It's not that noticeable until seen in the photos, honest. No, Timmy the Scythes Scout is not in the sale.

As far as painting this piece, it was more of an experiment with airbrushing. The entire piece was airbrushed with base colors throughout. The real trial and error parts came when adding the white to the barn and farm house. I was forced to be more careful with the spraying. Having to carefully limit the spraying to the narrow spaces. I was able to prevent much of the overspray by coming in at an angle.

After the base colors were put down. Just like a regular model, the detail work, dry brushing and washing  were then added. I also placed some grass in corners and flowery plants in the little garden in the corner. For what it was before, I was pleased with how it came out. Overall, it's a really nice piece if not just a tad bit small for 30mm figures. It's more on the scale of 25mm 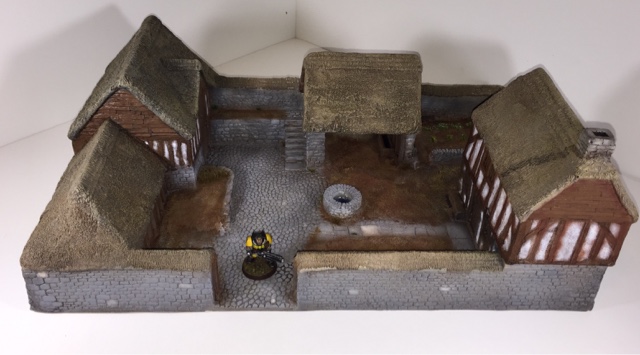 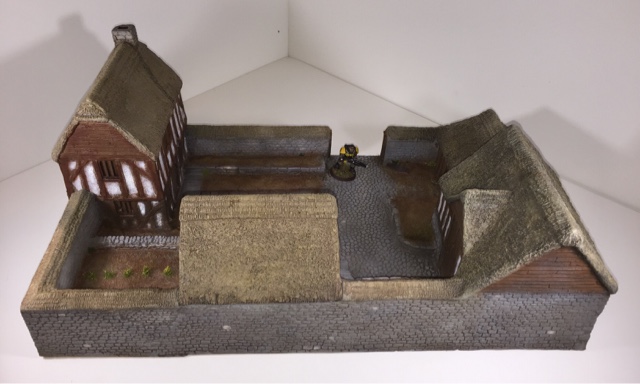 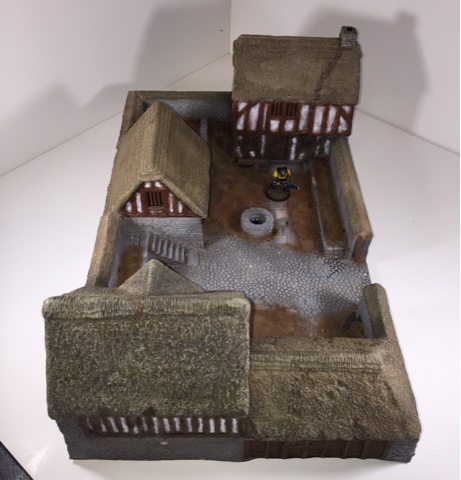 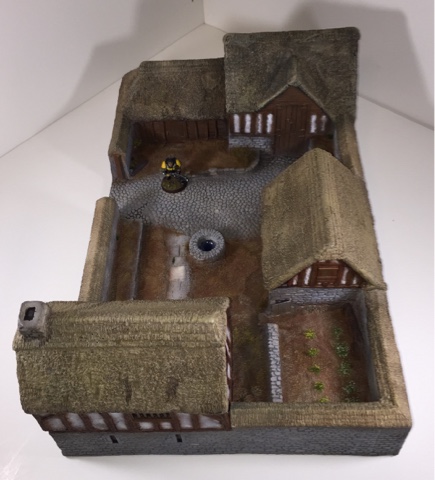 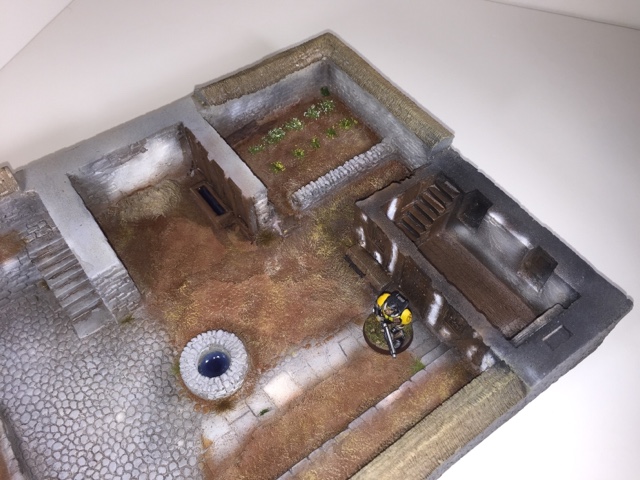 For the most part I am selling off old unused Skaven figures. My seller link is here. I will be selling off some Warhammer Wood Elves soon along with some old Grendel scenery too.