While I put together a point by point panting demo, here are some Skaven action poses. First, we have a smart assassin showing the best way to remove those pesky wizards. With a big hammer!


Leading from the front, the Warlord shown here is leading his band, while under the watchful eye of the Greyseer on the Bell in the background.

The Hellpit Abomination is preparing for the charge into the weakened Bretonnian line. This battle would not last long or in the Men-at-arms favor.

Again, next week I will show how to paint up skaven in several easy steps. These steps will get them to come out the same quality as the pics above, minus the Abomination.
Posted by color blind painter at 10:34 PM No comments: 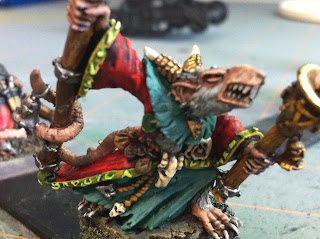 First off, my Grey Seer. I decided not to leave him mounted on the Screaming Bell. I can get more use out of him based. Speaking of, I had to add quite a bit of putty under the base. He is very fore-heavy. I completed the Bell also for him ride on. 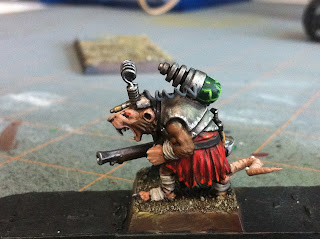 One of my hand made Engineers. He will be equipped with a warplock rifle, augmetics to give him +1 BS and a Warp Condenser. 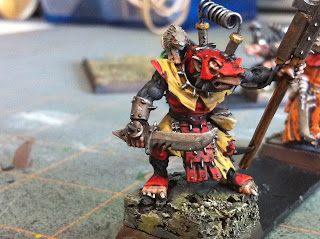 My Warlord/Chieftain, I decided to give him an attack-rat, warp enhanced weapon and made him from a Storm Vermin. All my storm vermin will be used for special creations. I have old 1st and 2nd generation Storm Vermins for my troops, 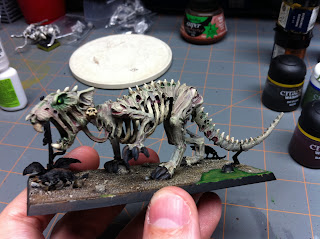 Can you guess what he will be used for? If you said a Hellpit Abomination, you get a cookie! He is from the Necromunda range, named The Caller. Rather easy to paint, base coated, wash, highlight, wash again, final touches. He is unfinished in this picture. The model itself needed some help to build. Couple of pins and a mound of greenstuff or two to fill in gaps at joints and feet. 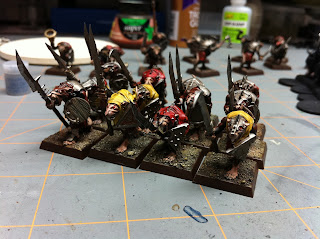 Some of my basic troops. I have models from 11yrs ago and these guys will be replacing them. These are from the latest box set, Island of Blood. I hope to make a 40 man(?) unit with them. You can see some troops from the regular box set in the back. I will show how I painted these up quickly later on. Doing that many to a high level can drive one crazy.
Posted by color blind painter at 10:18 PM 1 comment:

My first attempt at blogging has begun. I am red/green colorblind, but am a decent mini painter. I have won several awards for my miniatures along the way. I will try to post my works as I go along.
Posted by color blind painter at 7:54 PM No comments: